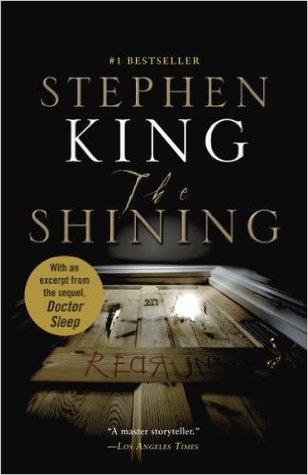 It’s been close to 40 years since I first read Stephen King’s The Shining, and it was without question one of the books that made me fan of King but a voracious reader as well. I don’t often re-read books for the reason that there are so many books that I have yet to read the first time. Since I had the follow-up book, Doctor Sleep, in my to read list and in anticipation of the upcoming movie adaptation, I decided it would be a good idea to return to King’s classic novel and check back in to the Overlook Hotel. So what is there to discover in this re-read?

The Torrance family is about to have a major change in their lives. Jack Torrance is about to take a job at an isolated and secluded hotel in the Rocky Mountains. Wendy, his wife, and five-year-old son Danny get to spend the Winter in the hotel while it is closed for the season. Jack is supposed to be the caretaker of the property while the rest of the staff are gone.

It’s a cliche story idea now, but at the hands of King who is one of the greatest influences of modern horror, it is a story that remains gripping to this day. The Cabin in the woods and isolation is the trope. In this case, it’s the hotel at the top of the Rockies and isolation. So of course horror ensues.

Jack looks forward to the time away from distractions. He plans to use a lot of the isolated time to work on his play. And as a recovering alcoholic, he is glad that the hotel’s supply of alcohol is taken away during the off season that he and his family are staying at the Overlook.

Danny, is a young boy with a peculiar power, a “shine” as the hotel’s cook, Jack Halloran,  calls it, a psychic ability. That ability is often pre-cognitive but in a place as old as the Overlook with its dark past, it also let’s Danny see the ghosts of the hotel.

Wendy feels the most happy being able to spend time with her family in the big luxury hotel.

And then there is the Overlook Hotel itself. It is a magnet for malevolence and dead spirits — not the friendly kind, either. This is a case where an abode is a character onto itself. It has a dark history and an even darker personality to go with it. Yes, it is indeed haunted and the spirits that inhabit it are the suffering spirits who have all met their ends in dark and often violent means. They all seem to coalesce into a single entity.

Danny’s presence in the hotel is a draw to the Overlook’s malevolence and it seems to want the family to not just stay but to die there as well. It is able to reach into Jack’s mind to poison his thoughts and make him slowly lose his grip on sanity, especially in the vulnerable state of being a recovering alcoholic.

This is Stephen King’s third novel and even after all these years it still has the powerful ability to grip me and keep me on the edge of my seat in tense unease. During my re-read, it does show some signs of its age especially in the way of technology as antiquated telephone technology (how many these days remember feeding quarters into a payphone and getting operator assistance?).

The characters are still memorable and though it may seem like a slow burn at first, it is an intentional choice by King to get us to become familiar with the characters. And those who may have only watched the Stanley Kubrick directed adaptation may find some surprises. Jack Torrance is not as mad as he is portrayed by Jack Nicholson. Rather, he is a writer who has achieved some minor success yet is not as successful as he wants to be. He genuinely loves his son and even in the end fights against the darkness that consumes him.

King was going through his own struggles with alcoholism at the time he wrote The Shining and it comes across as deeply personal, which would help explain his vested interest in the integrity of his story and criticisms of Stanley Kubrick. Now What Kubrick did in his film was truly remarkable and is often scary, but it is definitely a Kubrick film than a King film. Yet, The Shining is also one of the greatest horror novels of all time and is well worth at least one read through.