One thing I’ve noticed about modern anime is that sure enough, no matter the show, there will be waifu material in it. Is that a bad thing though? Certainly not — unless you engage in a heated waifu battle-rage wars about who is best girl. That is a given. What is not a given is actually having anime be educational. There have been a few anime that has actually been educational to me, Hikaru no Go, especially with its live action segments after each episode called “Go Go Eigo!” which taught viewers how to play the game of Go. There was The Rose of Versailles which covered quit well the court of Marie Antoinette and what would lead to the French Revolution and the Reign of Terror afterword. I’m sure there are others out there. One anime that does stand out for going out of its way to educate the audience is 2018’s Cells at Work. Yes, kids you can not only have your adorable waifus, but you can get a biology lesson as well — not that kind of biology you pervs.

Anthropomorphized things are nothing new, even to western audiences. Disney and Pixar gave us Cars, Zootopia, and Inside Out. Based on the manga series by Akane Shimizu, Cells at Work revolves mainly around a single red blood cell circulating within the system of a single human body. As the series unfolded I could not help but think, this guy (or gal) has incredibly bad luck and does really horrible things to their body. )There is, in fact, a spin-off manga where the person is in horrible shape, and lives an unhealthy lifestyle like smoking and drinking.) Throughout each episode we encounter a weekly  virus or bacteria to menace the body and it is up to white blood cells, killer t-cells or macrophages to solve the attacks. Even platelets get in on the action for the episode about a scrape wound. And they are plain adorable. 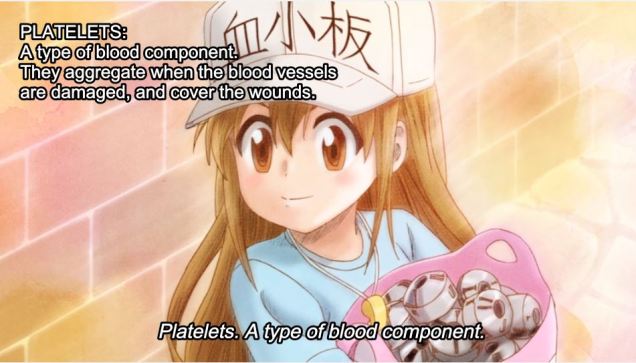 Each episode usually focuses on Red Blood Cell trying to go about her usually duties of delivering nutrients through the circulatory system of the body and because of this she is the perfect character to encounter various threats to the body. She does seem to keep encountering a particular white blood cell along the way and throughout the show they encounter such small things as a scrape to cancer cells.  With many of these encounters and as other cells are introduced, we get a narrator’s voice as well as onscreen text that explains the functions of a cell.

In all honesty the show not that spectacular, but the biology angle and its shear charm are what makes it special. It also helps that it benefits from high production animation and an episodic nature where you really don’t have to watch the episodes in any sort of order. I watched this show with a friend who is not only an anime fan but a biologist and so each episode he added comments of the accuracy of the show and even when it had stuff that was new to him. Either way, he enjoyed it.  There are a few videos of professionals reacting to the show and it’s been quite positive.

Yet it is absolute fun. The cast is not as huge as a typical shonen show, and in fact the characters are designed to look alike since they serve a certain purpose. Red Blood cells wear what appear to be Red uniform versions of UPS drivers and Macrophages are maid. Yet somehow the anime manages to imbue the characters with personality such as our main red cell who has the problem of always getting lost in the circulatory system. The White Blood is rather protective of Red. Which of course in the Internet age means, shipping! The platelets are possibly the most adorable group of characters in years and they do important work too. And dammit the Macrophages just personify beautiful but badass women. Plus they are adults. 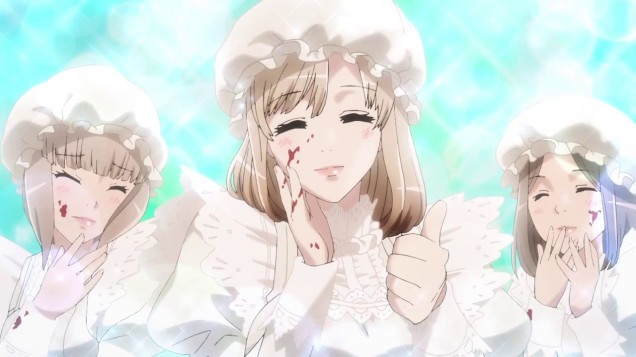 Cells at Work is not typically shonen nor is it slice of life, though there is a lot of slicing going on — get it? I made a pun. It is, however, a very entertaining comedy with action and enough charm to fill up a trailer. The uniqueness of the idea and the enduring quality of all the characters, even the bad viruses make this a show worth watching. It is one of those shows where it just feels good to watch, sit back, and enjoy.  You just may learn a few things along the way too. And if there is one lesson to be learned it is a philosophical one, your waifu is within you. 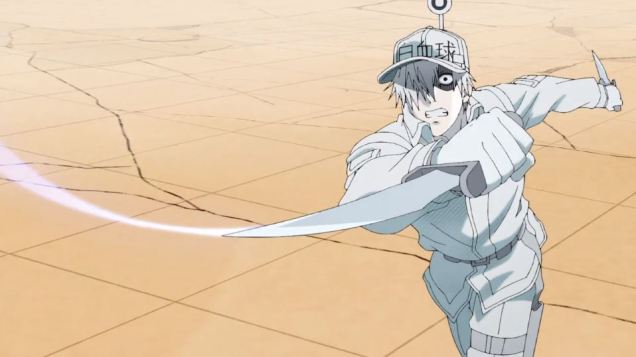 Cells at Work is currently streaming subtitled on Crunchyroll. The English manga is licensed by Kodansha comics both digitally and in print.