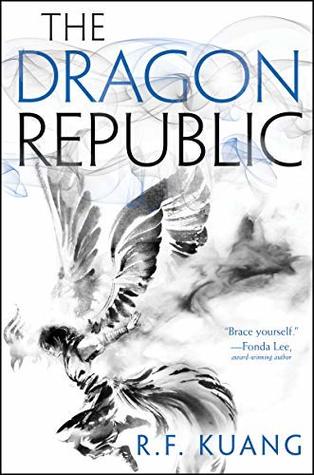 R.F. Kuang’s second book in her Poppy War Trilogy, The Dragon Republic, is not only as impressive as her first novel, The Poppy War, but is actually more mature in its writing style and confidence in storytelling that shows through the further world-building lore that is based heavily on Chinese history. There will be spoilers ahead for The Poppy War as this review will assume that you are already aware of the events, especially the end of that book.

After the events of The Poppy War, Rin and the surviving members of the Cike are on the run as the she is now enemies with the Nikan Empress who betrayed the nation to the invading Mugen Federation. She is also haunted by the death of Alton, the only other member of her Speerlie race. And even though she ended the war with the Federation by effectively committing genocide, chaos is left in its wake as soldiers without a nation to return to have resorted to wandering the country as bandits.

She soon finds herself joining with the warlord of the Dragon province who is also the father of her old school rival Nezha. It is the Dragon Warlord’s plan to lead a rebellion against the Empress and instituting a government based on democratic republic. As cynical as Rin is about this form of government she joins for the sake of vengeance against the traitorous Empress. Her best friend, Kitay,  from Sinegard Academy joins in the cause as well. Nezha, scarred and matured by the war is now a general under his father’s leadership.

New to the narrative is the nation of Hesperia. They come across as the equivalent of the Western European powers, equipped with firearms (something that the Nikari people have not seen) and airships, they are an imposing figure that allegedly supports the idea of a Dragon Republic. But they hold back on actual military support as they believe the Nikan people are not civilized enough yet. They also have their own agenda involving the spreading of their single deity religion and the examination of Rin’s shamanic power so that they can cure what they consider to be a manifestation of chaos.

The grim portrayal of Kuang’s world continues on an even broader scale as the scale of Rin’s observations on the war torn country around her expands to the multiple provinces. The effects of country that has just survives an invasion but now thrown into a civil war are all around her. There are mass exoduses and refugees fleeing from one place to another to escape conflict. On top of that is the lack of food for a population being overrun by conflict.

Rin still suffers from being more impulsive than she is smart — even though she is very smart. She is also still obsessed in following in the footsteps of Alton as a leader, even using his trident for which she is ill suited as a wielder. Her problems are even more compounded when her first face to face fight against the Empress results in her being cut off from her shaman powers.

Amid the cast of ambiguous characters with ambiguous motivations, Kitay stays the most true, and perhaps most innocent of characters. He also remains Rin’s truest friend. As in the previous novel, he anchors Rin as a moral compass and is the voice of reason. It doesn’t always work though. Fellow warlords and other generals tend to disregard some of his advice. Even Rin will give into her impulsive self than listen to reason much of the time.

Nezha’s character is much more fleshed out in The Dragon Republic as more is revealed about his family background and his motivations. His character arc is all the more intriguing when he and Rin come to know each other better and he also becomes a good friend to her. But he is also conflicted as a general and son of the Dragon Warlord who ultimately sees Rin as more of a tool of war and a bargaining chip that he throws to the Hesperians to study in exchange for their promised support. It becomes clear that the warlord is willing to sell her out if it is in his best interest.

The images of the after effects of war are haunting. There are many observations of starving peasants or bodies of civilian casualties littering field or floating in rivers. The Dragon province becomes a destination point for refugees fleeing starvation and band of former Mugen Federation soldiers now reduced to raiding defenseless villages. There is starvation and a definite lack of resources for these refugees which is made abundantly clear in the narrative.

Kuang’s structure and tone has definitely improved since the last book and events flow more naturally in the same three-part structure that was the structure of the first book. We also learn more about the shaman magic that Rin and others (including the Empress) have inherited. More is also revealed about the founding of the Nikan nation by the founding shamans. And with the introduction of the Hesperians, we get conflict not only in cultures but of religion as well.

Things coalesce in the third part of the book and it can seem to move quickly as groundwork that had been laid out throughout the narrative comes to a head as most of the novel’s plot threads come together with battles, betrayals and loss. As this is meant to be a trilogy, the novel ends at an appropriate point that does not feel like a cheap cliffhanger, but will still leave you with anticipation for the third and concluding book in the trilogy.

Ms. Kuang has grown quite a bit as a storyteller from her debut to her second novel and her ability to weave complex ideas has grown with her. He displays some great depictions of military tactics and action. She also manages to juggle a bigger cast and more complex issues such as politics and the plight of wartime refugees. Her main character, Rin has to go through a lot of development and emotional growth which she did not manage to handle as well in the first book. And the complexities of Rin’s character arc throughout the book is often filled with frustration, anger, and raw emotion as she has to examine what her place in the world is with or without her shamanic powers.

The Dragon Republic is more than a worthy follow-up to The Poppy War and I for one am in great anticipation of the final book because this is an amazing story that has been captivating from the beginning.