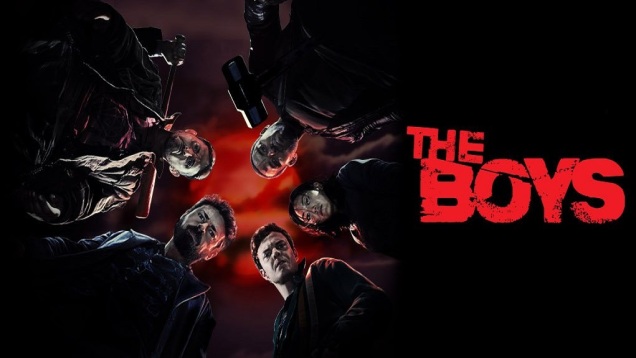 Warning: This review will contain and reference graphic violence and language throughout.

If you are undergoing a bit of superhero fatigue because they all seem generic and PG-13 sanitized, the expletive filled and violent Deadpool films may fill that void. If you think those are even a little too sanitized, then The Boys series on Amazon Prime just may be your cup of tea. It out-swears and out-gores Deadpool. It doesn’t just paint superheroes in a bad light, it practically makes them villains.

There are many references to Marvel – and especially DC superheroes in the show. In fact, The Boys started out as a comic published by DC under their Wildstorm imprint, but the comic and label were cancelled. The Boys found its home with Dynamite publishing Now Amazon has adapted it for their Prime service.

Superheroes, commonly referred to as Supes in the show are commonplace personalities in the world, specifically the United States. They are looked up to and admired by the masses. In the opening scene, we see an attempted armored car robbery be foiled by two superheroes who have none too subtle similarities to the looks and abilities to Wonder Woman and Superman.

The very next scene shows us that some fucked up shit is going to be happening from this point on. Hughie (Jack Quaid) works at a Radio Shack like electronics store, not quite happy at his job. But he does have a great relationship with his girlfriend, until the day a superhero speedster known as A-Train (Jessie T. Usher) plows through her, leaving a pile of blood and gore.  Barely stopping he continues on his way.

The Supes are apparently under the umbrella of the Vought Corporation. They market the heroes and hire them out to cities for protection from crime. And they also produce movies staring these supes as well as create theme parks around them. Add toys and other merchandising and it is obvious that this is a huge corporate company with assets worth billions of dollars. And yes, it is probably a purposeful dig at Marvel Studios and Disney.

It is mentioned that there are over 200 heroes in the country but the prime spot for any of these heroes is to be a part of The Seven, a superhero team that is basically the Justice League. After the retirement of a member, a young and relatively naive superhero from Iowa is given the opportunity to join The Seven.

As you can imagine, things don’t go entirely as planned. Hughie’s life is in danger from invisible superhero Translucent. Butcher saves him and the two take Translucent prisoner. It turns out that Butcher is not who he claimed to be but that he is hell bent on exposing the supes for what they are — a bunch of self-serving sociopaths who care nothing for the public other than their polling numbers, their fake personas, and profits from endorsements. Butcher has no compunction killing supes and hates them all for reasons that are revealed in a later episodes.

Spanning eight episodes, there is practically no filler in this lean series. Every episode advances the story forward. The show takes the concept of superheroes and subverts them more than any other media has ever done, perhaps even more than Watchman. And it is very difficult to give an in depth review without too many spoilers. Each episode is a revelation and they are several arcs that encompass the entire first season run.

In any other comic book universe, the members of The Boys which include other members, Frenchie (Tomer Capon) and Mother’s Milk (Laz Alonzso), would be considered super-villains. But in this world, The Boys do not have super powers and they don’t have tons of money. These are working class folks, each with reasons to hate supes. 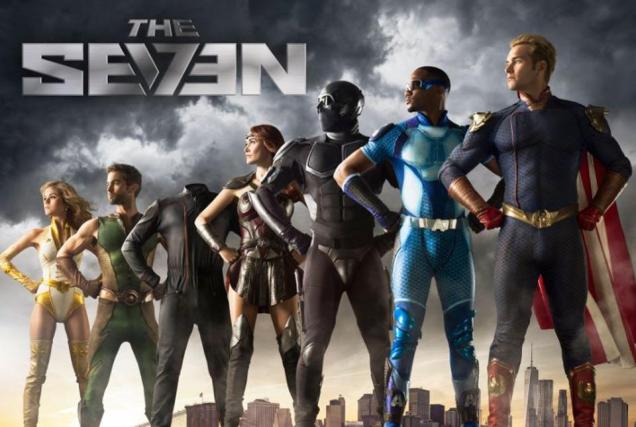 But the world loves its superheroes and think that they can do no wrong. Even in a superhero survivors therapy group, there is no real animosity towards them. But because of their larger than life personas and relentless corporate marketing, the heroes are treated like gods. And the biggest face of that pantheon is Homelander, played perfectly by Antony Starr. Homelander is basically a combination of Superman, Captain America and maybe All Might from the My Hero Academia manga and anime. He even has a flag as a cape. Too bad he’s the biggest cunt in the series. Out of the other Seven, he is an the true sociopath.

Possibly the second most popular member of The Seven is Queen Maeve, (Dominique McElligott) a character analogous to DC’s Wonder Woman as personified by Gal Gadot. She’s definitely in on the dirty business of the superhero life but she is also sympathetic to Starlight’s plight as the new girls and shows genuine remorse for some victims that she can not save while, Homelander shrugs it off and seizes it as a PR opportunity.

Underlying the background of these supes is their control by corporate ownership of Vought, which to them not only is their source of fame and money, but their protection from undue scrutiny and lawsuits. It is soon apparent that they have more than a marketing interest in their supes as they push for lawmakers to allow them to serve in the military as weaponized soldiers. Right away, that is a red flag in any movie or television show, even one that is subverting the genre. They also market the idea that supes are blessed by God to protect people.

The Boys does more than subvert the superhero genre, it gives it a big middle finger to its face. It also is a scathing critique of the cult of personality associated with superheros by painting them as egotistical hypocritical figures who think they are above the law. Now, one can’t but help that in real life comic book movies, Marvel ones in particular, are extremely popular. But none of them, not even the dark visions of Zack Snyder, address the day to day implications of having that much power over a population of non powered beings and the ramifications of how much terror they really cause. Yet amidst all this dark subversive storytelling is also dark subversive comedy that dials up the satire to 11.

The cast is full of personality and Karl Urban chews up his scenes with a plethora of cunts and fucks coming out of his mouth, which is supposed to be a British accent, but sounds more Australian (Karl Urban is from New Zealand). Fellow New Zealander, Antony Starr plays Homelander as the perfect all-smiling all-American hero, while underneath, he’s as total bastard, more of the Evil Superman than the kid in Brightburn. Chace Crawford plays The Deep, an unlikable person from the start who is also a joke to the rest of The Seven because his superpower is talking to fish. Though he is not really deserving of our sympathy, his back story is very interesting. Erin Moriarty Starlight serves as the only supe deserving of our sympathy as she serves as the idealistic one from the small town but thrust into the dark fucked up reality of the corporate superhero world where her image is controlled and her popularity is polled daily. Simon Pegg is featured in a couple of episodes as Hughie’s father which is an homage to the comics, since Hughie was modeled after Simon Pegg.

This show is most definitely not for everyone. It can be crass, crude, gory and uncomfortable. But it is also one of the best takes on superheroes up to date. It turns the idea of superheroes on its head and subverts the idealized idea of them. This show would not be possible and probably be as good as it is if it weren’t for how popular the superhero genre is right now. Avengers: Endgame is now the highest grossing film of all time and it was only a matter of time that a film or television series was made as an anti-superhero series. Now I’ve not read the comics that the series is based on but I never at one time felt it was necessary to have read them to get enjoyment out of it. Thankfully, Amazon has already greenlit a second season and I look forward to it as it ended on a massive cliffhanger.