In the piles of anime that come out seasonally it can be easy to overlook some of the good ones. For me, there is just too much anime to stream and watch on Blu-ray and my backlog is huge. And sometimes I’m just not in the mood for certain things. So it’s easy to just start off with the latest moé blob show and complain how current anime is in a quagmire of overly cute lolis, isekai, and shonen trash.

And then Violet Evergarden comes along to to show that anime can be original, emotional, and yes beautiful.

Violet Evergarden is a thirteen episode anime series (plus one bonus OVA) presented by Netflix. Produced and animated by Kyoto Animation, a studio with a track record of high quality titles such as the Full Metal Panic series, Clannad, and the beautiful A Silent Voice, It is an anime that maintains feature film quality in every episode.

The world is one that is similar to early 20th century, post World War I Europe. And that world is just recently recovering from a devastating long war. The differences are subtle, ch as the written language and the technology. And of course it’s history is different. 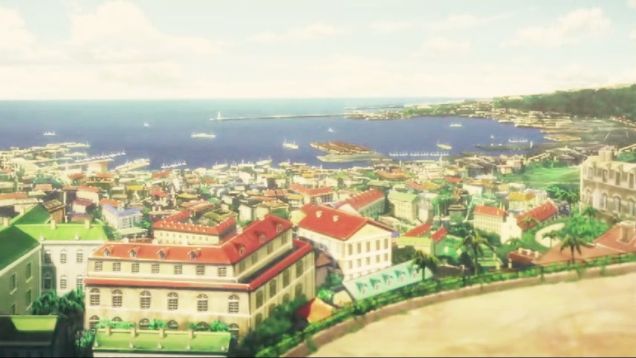 We first meet the main character, Violet recovering in a hospital from war injuries that has left her without both hands. She is fitted with mechanical prosthetic hands that give her full motor function. Her last memories are of watching over her severely wounded commanding officer Major Gilbert Bougainvillea. One of the last things he says  to her are “Live and be free.” Violet, having been in the army since she was a child,  is used to following orders and has always carried them out without question and often lethally. She believes her purpose is to only be a military tool. But the war is over and she knows no other life. She has a certain naive quality to her about anything outside her world of military service though.

Claudia Hodgins, a friend and comrade of Major Bougainvillea takes Violet in and gives offers her a job, initially as a postal carrier for his company, a postal service. They write and deliver letters at the request of clients who don’t know how to write. She ends up wanting to be a “Auto Memory Doll.” A service where a person not only writes what a person says to be written, but must see what is in the person’s heart for their true meanings. Normally, people become Auto Memory Dolls, because they understand three words, according to Claudia, but Violet wants to become a doll, because she wants to understand the meaning of those three words, “I love you,” the last thing the Major said to her.

The next handful of episodes are concerned with development of several members of the postal service. The series itself is episodic in nature, yet should be seen in sequence for the development of the main character of Violet as she becomes more in tune with not only her job, but her abilities as an auto-memory doll. The supporting characters are also unique in each of their personalities and have their own back stories that are revealed as the show progresses.

Every episode, though self-contained, is a piece of character development for Violet. It becomes clear that when people say they don’t know how to write, it is more of an analogy that they don’t know how to express themselves from the heart. Almost every episode conveys the importance of communicating inner feelings. And it is the auto-memory dolls, ghost writers for these clients, who draw out a person’s true meaning and feelings while sitting with them taking and listening to their feeling.

One of the most unique and beautiful episodes is a of a playwright who is suffering from writer’s block. By this time in the show, she has been able to connect more emotionally with others and  and grown as a an auto-memory doll in her ability to convey a client’s emotions to paper. Through several days of Violet’s time with the writer, we realize that he is suffering from a great loss that he has yet come to grips with. We are also beginning to know more about Violet’s bloody past when she dispatched enemies without question and with dispassion.

By the time you get to episode ten “Loved Ones Will Always Watch Over You,” you would have been exposed to peak emotions as it is deals with family love, death, loss, and the eternal love a mother will have for her child. And as much as the ending is telegraphed, the emotions still hit you like a ton of bricks by the end. Episode ten even became a YouTube meme as there are dozens of episode ten reactions posted on the video channel of people reacting to the episode live. 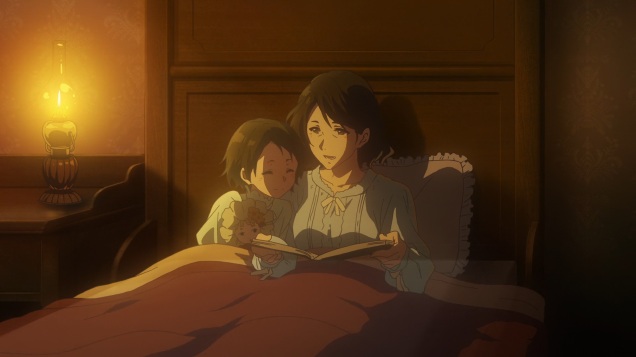 As the series winds up, Violet’s history unfolds as well. Her sad story as a tool of war is explored more as well as her relationship with the Major. And as the series unfolds, she not only becomes more in touch emotionally but must eventually come to terms that is of no surprise to us, that the Major is never coming back even though his body was never found.

Not just every episode, but every minute, every shot of the series is an example of high quality animation that you would usually find in high budget feature anime films. The music, by relative newcomer Evan Call, is not only beautiful in its work but is remarkable for its ability to carry emotion whether it is in scenes of lyrical beauty or intense action. 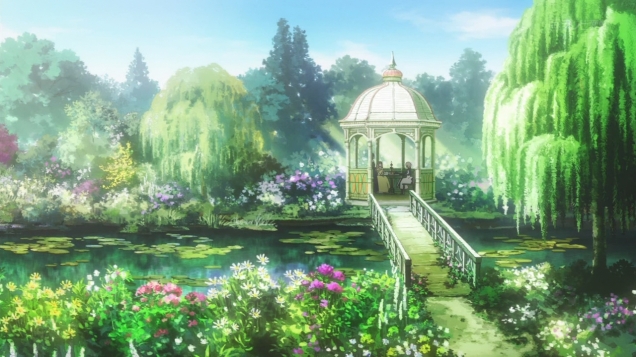 Violet Evergarden is anime storytelling that does not fall into typical genre categories. It is not an action show, a romance, nor cute girls doing cute thing, or even a slice of life, and definitely not any of the dozens of isekai shows out there. It is instead good storytelling set in a near fully realized alternate world. Though some of the themes can be mature, it is handled with care and not gratuitous, especially when addressing the impact of war and the effects of its violence on people.

Violet Evergarden streams on Netflix in both the original Japanese language with English subtitles or in a well done English dub. You would be fine with streaming it either way. It also comes Highly recommended.