The average movie and genre fan may be familiar with Hayao Miyazaki and the films of Studio Ghibli, which is a good thing. But Hayao Miyazaki will be retiring (again) after one final film and the fate of Studio Ghibli is uncertain. But for the last few years as other anime creators are stepping up with quality anime that tell compelling stories for diverse ages using the medium of animation. The recent phenomenal success of Makoto Shinkai’s Your Name shows that there is massive talent out there that can break into the consciousness of Western movie audiences. I’ve already lauded heaps of praise for Mari Okada’s debut film Maquia, and although it still has yet to receive a North American disc release, A Silent Voice is one of the finest and most moving anime, let alone films, to come along in years. But it was totally snubbed by the Academy for Best Animated Feature that year. So f*ck you, Oscars and your Ferdinand and Boss Baby! More on that later.

One director who has been consistent in quality storytelling and quality animation has been Mamoro Hosoda. From his debut, The Girl Who Leapt Through Time he has shown not only a knack for creating believable characters but situations that blend the fantastic into mundane lives. Family bonds were explored as major themes during Summer Wars and the tear-jerking Wolf Children.

Mamoro Hosoda’s latest film, Mirai (not to be confused with the new Toyota hydrogen fuel car), starts of simply as a four-year old boy, Kun, has so far enjoyed his life as a single child, meets his new baby sister. She is named Mirai, which means (in a little bit of foreshadowing) “future.” What follows is what seems like the standard trope of the brother being jealous of the new little sister that has intruded on a world where he had always been the center of attention. Hosoda injects his unique brand of fantasy into the narrative.

It seems every time that he lashes out or throws a tantrum, and happens to go out into the house’s yard, a world opens up to him where time and space, and the laws of reality bend to create a surreal experience for Kun. Each of these experience seem to be lesson to him much like the visitations Scrooge experiences from the ghosts. And Kun is going to need a lot of lessons along the way.

Some of these appearances are incredibly surreal such as the anthropomorphism of the family dog, who complains he was the prince of the house and everyone’s favorite, until Kun came along. Sound familiar? Well that does give a little perspective to Kun.

He does also get to meet a future version of his sister. She admonishes him by telling him to be nicer to her when she is a baby. But also serves as the main guide for Kun. Along the way we also get introduced to his great-grandfather who serves as an inspiration for the most simplest of tasks of childhood development, the removal of training wheels. 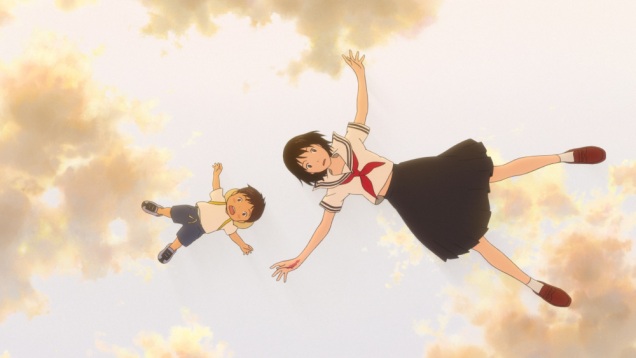 But at the heart of all the fancy and the whimsy is a family dynamic that is truly built on love for one another. There is light banter, reminiscences, and casual conversations that ring authentic and is like a window into a real family. Except for the time and space bending.

The dynamic between Kun’s mother and father is charming and comes across as genuine. But since this is mostly a film from Kun’s point of view, Hosoda has made sure that the character is not overly annoying as so often little children can be in anime. Yes, Kun throws tantrums, acts out and cries. But it comes across as natural and not mawkish. And although Hosoda is an only child, he is a father of two.

I think what I experience with my family, such as the joys and troubles in our everyday life, is something other families in other parts of the world would experience as well. Three years ago, we welcomed a new baby [girl], and my three-year-old son just couldn’t accept the fact that he was now an older brother. He threw tantrums because he didn’t want to share his parents’ love. When I saw that, I thought I saw the raw and bare soul of a human being. Humans can’t survive without love. Life is all about longing to be loved, wandering around to find love, and accepting others to gain love. That’s what I learned from my three-year-old son.

What we are left with in the end is a film that is personal, charming, and funny. But it is not Studio Ghibli, and Hosoda is not Hiyao Miyazaki. Where Miyazaki goes for grand pieces of animation and themes, Hosoda really excels at bringing out humanity and personality out of his characters. Despite all the fantastical settings, the focus is on family. Their styles are different but they are similar in that they know how to tell a good story using animation. There may never be a director like Hiyao Miyazaki, but there is no director like Mamoru Hosoda either. And that is what makes him so unique in that he is so accomplished, so talented that his movies garner attention on their own.

Mamoru Hosoda has been invited to join the Academy of Motion Pictures, Arts, and Sciences. So perhaps he can have some sort of influence on the joke of the category that is Best Animated feature. For now, though, Mirai is in limited distribution and just received a Golden Globe nomination for Best Animated Feature.