What would you do if one day dozens of Adelie penguins started showing up in your little suburban town for no apparent reason? This becomes the trigger event for a surreal, yet beautiful, coming of age anime from anime film Penguin Highway that is sure to bring some delight to a dull day. And if, like me, you happen to have a love of penguins, you will be in for a joyful animated treat.

Aoyama is an overachieving self admitted genius. He is also in the fourth grade. Yet he keeps extensive notebooks on daily observations in life as his goal is to become a Nobel Prize winning scientist. He has a natural scientific curiosity about everything which is encouraged and cultivated by his parents. But frankly, he’s not as much of a genius as he thinks he is as he is a little clueless in may other areas as will be shown in the film. But he is definitely above average in the class. Fellow classmate, Hamamoto is a girl that he admits just might be smarter than him. His best friend, Uchida serves as the devoted sidekick who tends to states obvious facts that everyone misses such as who has a crush on who.

Aoyama has a fascination with the local dental assistant who is never really named but either addressed as Miss, or Onee-san, the honorific for big sister. We normal people would call it a crush, but he has no clue about that aspect of life. He also has an odd curiosity and fascination with her breasts. Though charming initially, it does become a little creepy as the film continues. Aoyama may be precocious but he is appropriately awkward in the world and sometimes his curiosity gets the better of him as he tries to see how long a person can go without eating.

One seemingly normal school day, penguins are spotted by many people in town and Aoyama decides it is his mission to investigate the phenomenon and solve the mystery of their sudden appearance. He discovers that they are Adelie penguins which are native to the Antarctic and not escaped zoo animals. A Japanese suburb is definitely not their natural habitat. Aoyama discovers that the ones that were rounded up by the local authorities suddenly vanished while in the truck carrying them.The mystery deepens and the game is afoot as Aoyama feels he has to get to the bottom of this enigma. And in true young kids fashion, the film’s Scooby gang is soon on the case.

He is of course teamed up with his classmates and Onee-san in his effort to solve the mystery of the penguins. By using observation and deduction he is determined to get to the truth. This truth will end up leading Aoyama and company on a road filled with surreal penguin appearances and disappearances,  inter-dimensional bubbles, and of course a little young romance.

Penguin Highway is the debut feature film of Hiroyau Ishida, but you would not think so as he deftly handles the story elements of the children with quite a bit of finesse  and never makes them seem annoying in their rambunctiousness as so often happens anime. Based on the novel of the same name by Tomiko Morimi, each of the characters are given their main moments and even the bully character is not really all that bad.

The final act comes together in a literal flood of adorable penguins and a dreamlike town that bends reality like a drug induced vision that is cute, funny and mind bending. Don’t let the fact that I absolutely love penguins and animes that feature them are especially endearing. This is a film that is heartwarming and quint and tells a story that can only be done in animation. On top of that it celebrates intellectual curiosity and the belief in science and the scientific method of evidence gathering.

But the final act may not make a lot of sense to many people and may leave some with more questions than answers while the final credits roll. But perhaps that is a good thing and maybe we’ll have to keep thinking about it later. Of course this is also all the more reason to watch it again.

At its heart, Penguin Highway is as simple a coming of age story as they come — except there’s space-time bending and penguins. It is uplifting and the visuals are absolutely stunning. If you happen to catch it dubbed the young characters are actually played by age appropriate actors. Although in some scenes, their young inexperience in voice work is evident.

I first saw Penguin Highway as an early screening during 2018’s Crunchyroll Expo and was deeply impressed. When it received a theatrical release, it was fairly limited but now it is available in a Blu-ray/DVD combo at all major retailers by Eleven Arts Entertainment and Shout Factory. If you are interested in a Collector’s Edition, it is available to order from RightStuf.com which is probably the largest online retailer of anime and Manga in the world if not America. 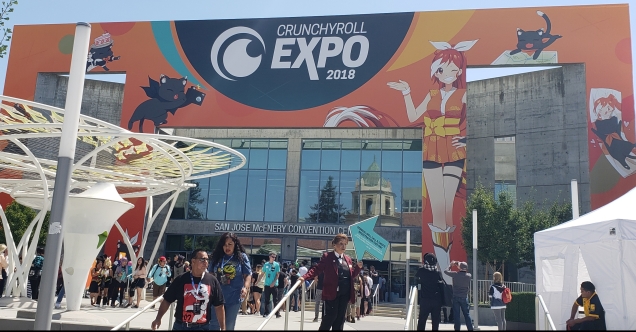 For those who are not familiar with Crunchyroll and it’s service, it is probably the largest provider of anime streaming content on the Internet. Through mobile and console apps via Roku, Amazon Fire, Playstation and XBox, they have grown very popular as the default service for licensed legally available anime. One of the pluses is their licensing deals with Japanese studios to allow simulcasts of current anime seasons. That means as an episode airs in Japan, it is streamed online with subtitles that same day.

In 2017, Crunchyroll had their first Crunchyroll Expo (CRX for short) at the Santa Clara Convention Center. It was quite a good turnout as a medium-sized convention, Not San Diego Comic-Con numbers, and that is a good thing. This year, CRX was held in San Jose, a larger venue and at least as big a crowd if not bigger. To be fair SacAnime was also going on in Sacramento and the behemoth of Dragon Con was also going in in Atlanta.

CRX differs a few ways from other anime conventions in that since it is run by a specific company there is of course bias towards Crunchyroll and it’s content. If you’ve ever been to Sony’s PSX, then this might sound familiar. Fortunately, Crunchyroll has enough content worth running a convention over.

The exhibit hall of the convention center had much to offer, including food from outside vendors whose menus included katsu curry sandwiches, takoyaki, and what has become a mainstay at geeky conventions in San Jose’s convention center, Psycho Donuts.

In addition to the main hall being a vendors room where you can get all sorts of anime related merchandise from blu-rays to cosplay wigs, figures, plushies and even body pillows, there  was an extensive artists area. This artist area is a great place for finding art prints, postcards, even crochet. And to me the examples of creativity is really well represented in anime conventions.

This year, there were quite a few premiers and retrospective screenings of anime films all throughout the day. GKids, which is celebrating its 10 anniversary, brought in their library of Studio Ghibli films and even their Irish import, The Secret of Kells.  A major stand out for me was the premier of the English dub of Maquia. It had previously made the rounds in limited release subtitled and is now about to make the rounds again dubbed. If you get a chance to see this in the theater do so — and call your mother. Seriously, you’ll want to. It is truly a beautifully animated film that is also incredibly emotional as well.

Another premier was for a new anime about to make the rounds called Penguin Highway. It’s quite a charming and at times surreal film about youth, inquisitiveness, and of course penguins. I’m a sucker for pengins already adn penguins in anime will score huge points from me.

Both films came courtesy of Eleven Arts Studio which was responsible for bringing over the truly remarkable film A Silent Voice — which , by the way, still doesn’t have a North American home video release. I had to import the Region B UK blu-ray. Luckily I had a blu-ray player that can switch regions. More in-depth reviews of both films are forthcoming.

One new upcoming show I got to see was the premier of The Rise of the Shield Hero coming in January to Crunchyroll. Yes it’s yet another Isekai anime, a genre where a protagonist is brought out of their regular mundane world and transported to a fantasy RPG like world. And frankly for the first half of the premier episode I was cynical, but after a twist it does become very interesting and becomes a little darker. I’ll be looking forward to where they go with this in January. Meanwhile there have been several light novels and manga already translated and available already.

Of course, as with most anime conventions, there are guests. One of the most popular animes right now is My Hero Academia, an anime that is heavily influenced by Western super-hero comics. So it’s no wonder that it has a cross appeal not just because its influences but because it’s a darn good show. In my opinion it is also a show that is very well done in the English dub and several of the English voice actors were on hand having fun swapping their roles from several scenes from the show.

Crunchyroll was just recently acquired by AT&T and I don’t know how that will effect the service going forward and also the future of any more Expos. But if AT&T were smart and cared (seriously, I doubt that from my experience) they will grow and continue on with CRX. So until next year — hopefully…